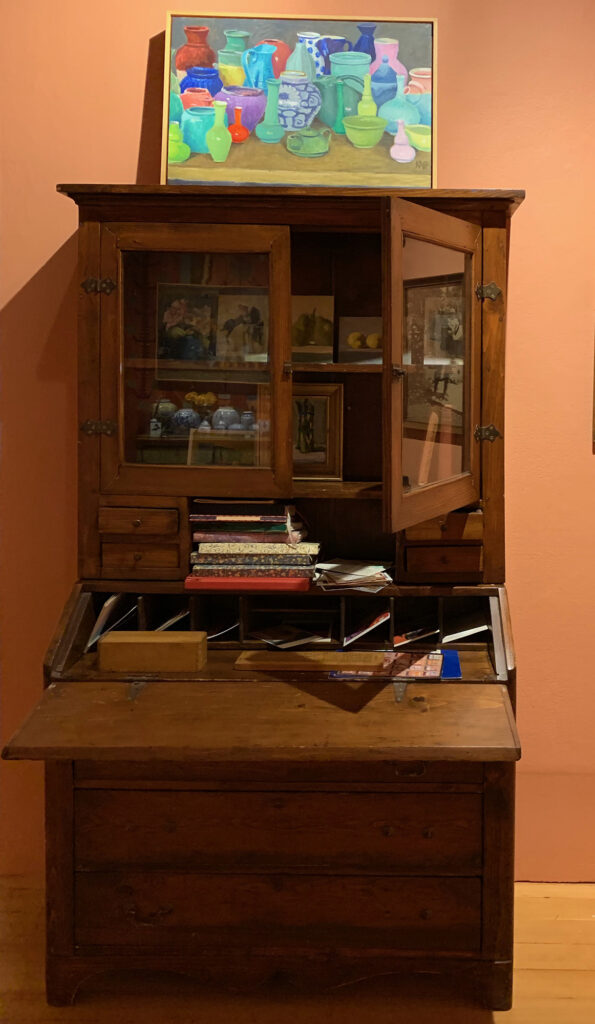 This antique secretary usually can be found in the Log House at Nepenthe where both Erin and Kaffe spent their early years.

On top is a still life painting by Kaffe.

The selves contain oil studies by Erin. Below is a stack of her sketchbooks, mostly from annual painting excursions to Italy.

The desktop includes postcard correspondences between Kaffe and Erin, as well as some dominoes from BIll Fassett’s collection. 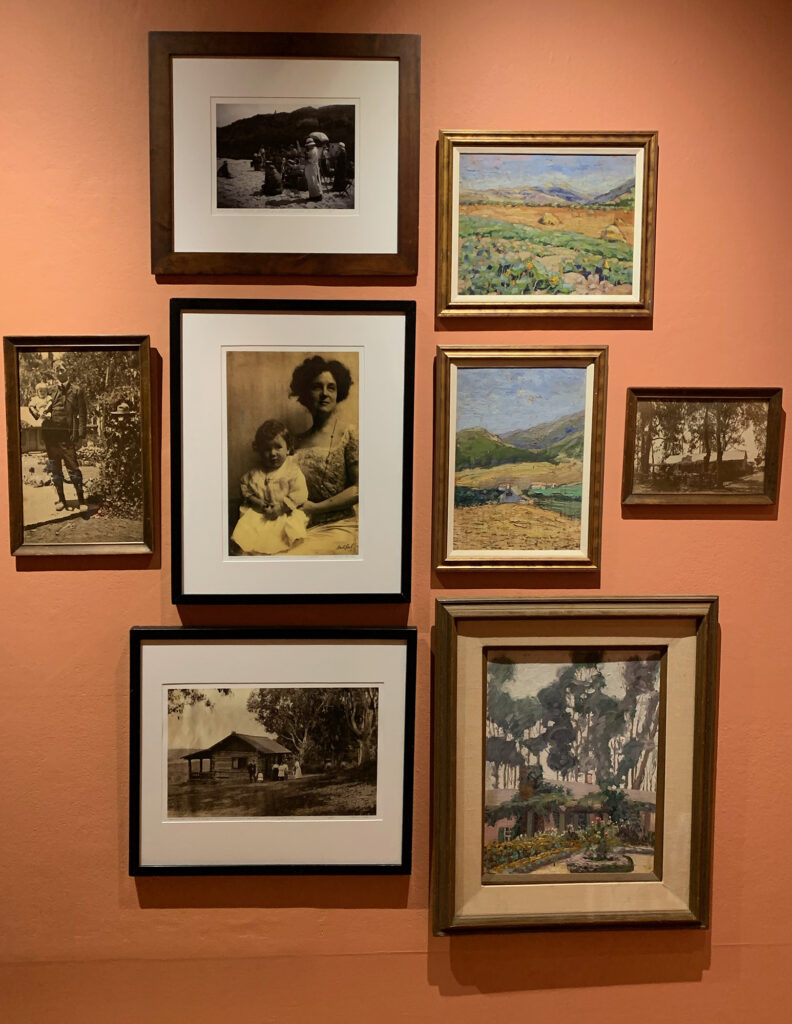 This group of photos and paintings are lifted from Carmel’s early years. Before there was Carmel-by-the-Sea, there was the Carmel Development Company. Jane Gallatin Powers, along with her husband Frank Powers (Kaffe’s great-grand-parents), founded the company, named the streets, and began the successful development of the town, with partner, Frank Devendorf.

Jane Gallatin Powers studied painting in San Francisco, and had the first art studio in Carmel in 1903.

Frank Powers holding granddaughter, Madeline (Lolly) Ulman in front of the family home The Dunes located near what is now the Carmel Gate on San Antonio, entering Pebble Beach.

A group of painters on Carmel Beach during the 1914 Painting School with teacher, William Merritt Chase organized by Jane Gallatin Powers.

Portrait of Jane Gallatin Powers with her youngest, a son, Gallatin. Gallatin grew up to become a local restaurateur, first opening Gallatin’s Grub and Grog at Bixby Bridge in the 1940’s, and later Gallatins at the old Stoke’s Adobe in Monterey.

The Powers family photographed in front of Jane’s studio next door to The Dunes on San Antonio in Carmel.

The Dunes by Jane Gallatin Powers – a painting of their home in Carmel, circa 1910.

A photograph of The Dunes surrounded by a stand of eucalyptus trees. Looking closely to the left, Frank Powers can be seen in the same campaign hat that rests near his shoulder in the photo on the left, indicating these two photos were taken on the same day. 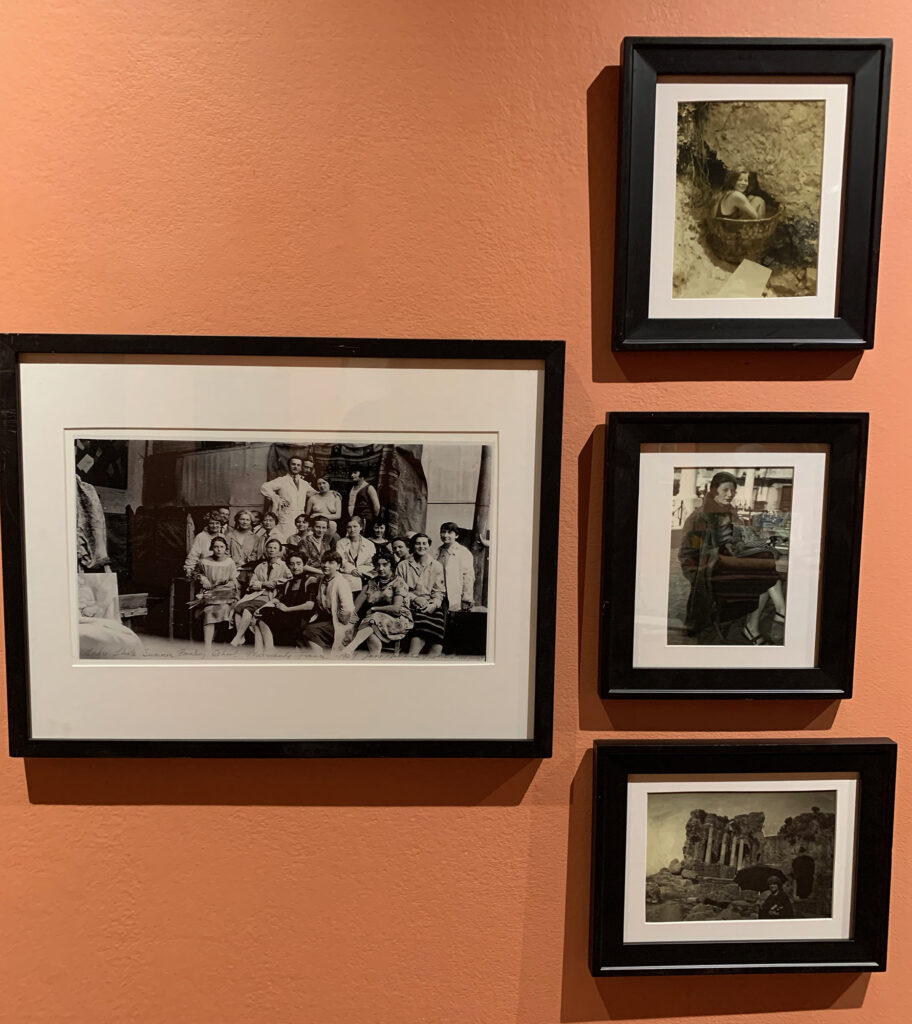 In 1920, Frank Powers died. Soon after Jane Gallatin Powers moved to Europe with three of her four children (Madeline Sr., mother of Madeline (Lolly) Ulman stayed behind as she was raising a family.

Jane studied Modernist painting and pursued her art very seriously. When Lolly turned 18 she came to live with her grandmother in Europe for six years. These years became inspirational in later years when Lolly founded Nepenthe restaurant in Big Sur.

Madeline (Lolly) Ulman having a cool dip in bucket on the isle of Capri.

Madeline (Lolly) Ulman sits in a cafe in the Piazzetta on the isle of Capri.

Jane Gallatin Powers with parasol touring the ruins of a Greek Theater in Taormina in Sicily. 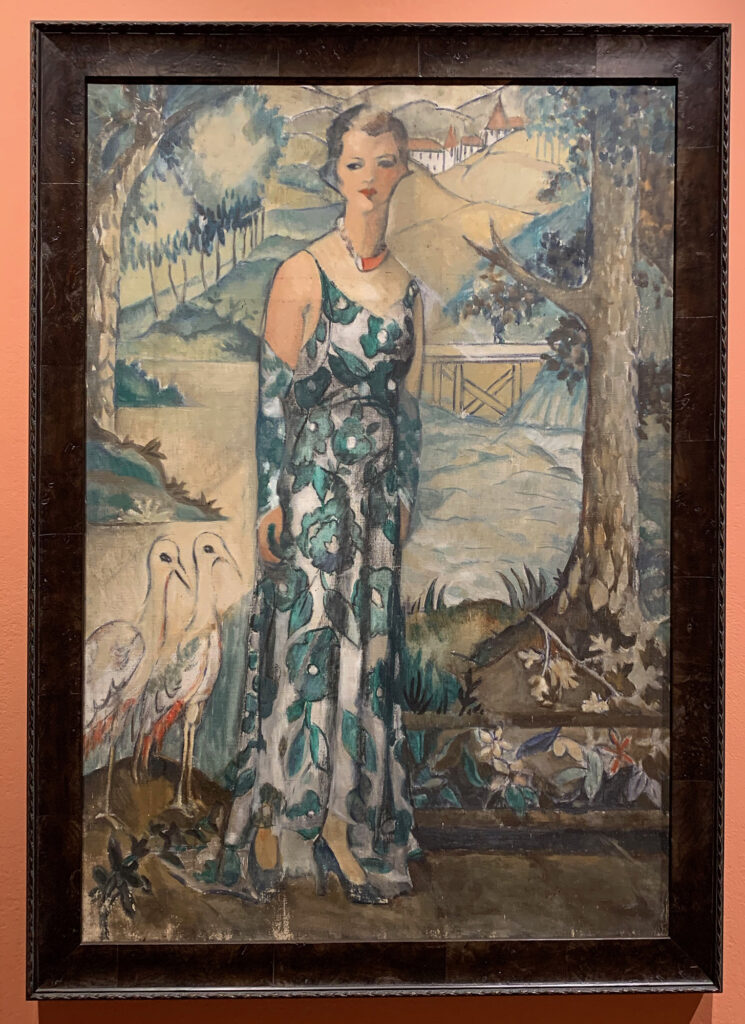 During Lolly’s years with Jane Gallatin Powers she acted as a traveling companion as well as a painting model. Here is a portrait of Lolly by Jane in an evening gown, standing before a tapestry. 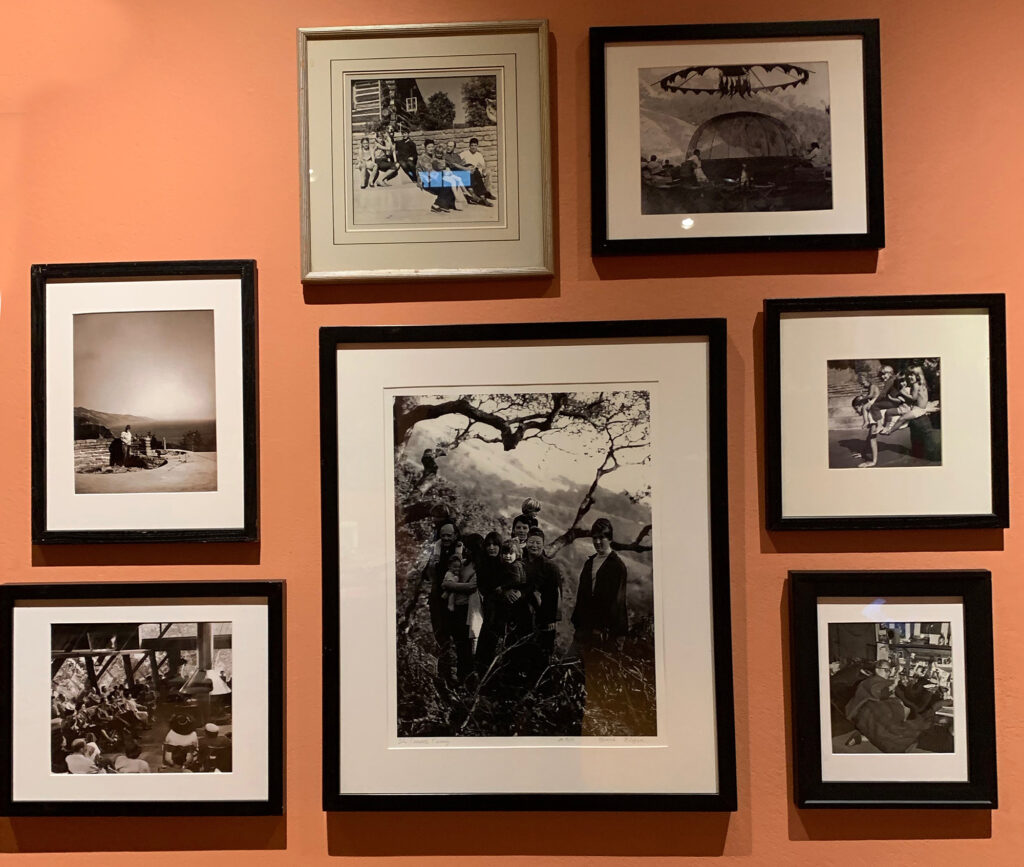 In 1947, Bill and Lolly Fassett purchased a piece of land 28 miles south of Carmel. They moved their with their five children (second oldest was Frank (Kaffe) Fassett) and built Nepenthe Restaurant.

These photos from Nepenthe’s early days include –

Bill and Lolly Fassett under one of the oak trees on Nepenthe’s property circa 1965. Includes; Cap (on Bill’s shoulders), Kim (carrying daughter Romney), Holly (holding daughter Erin), Kaffe (with Kirk on his shoulders), and Dorcas.

Too Tall Paul gives a ride to kids in the family, Romney, Kirk, Cap & Erin. 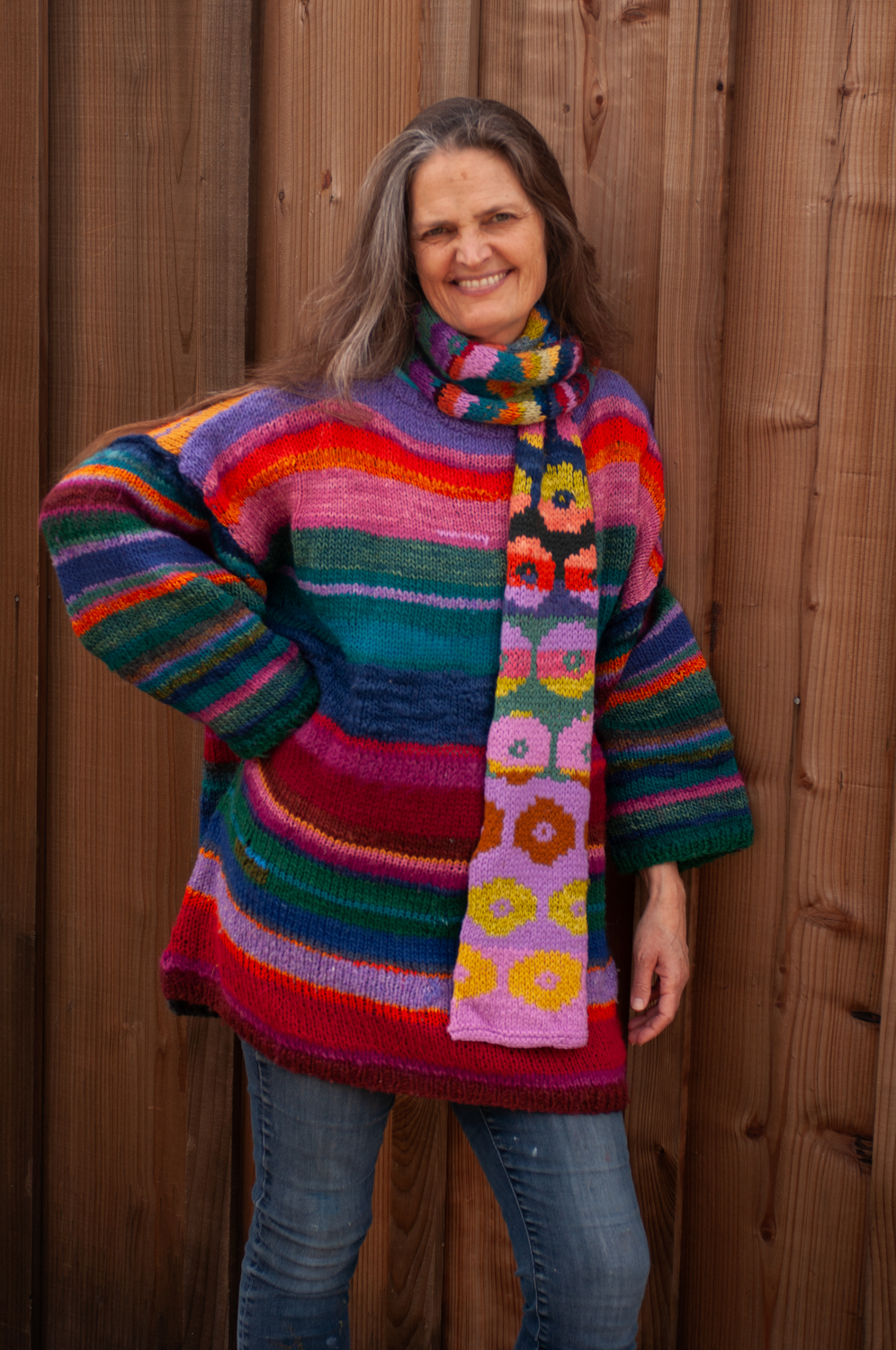 A fifth-generation California artist, Erin is the recipient of the Jennifer Hill Prize from the Carmel Plein Air Festival, and has been elected Best Local Artist three times by the Monterey County Weekly.

In 2001, she was honored as the first American artist-in-residence at the Hamada International Children’s Museum of Art in Hamada, Japan.
In 2008, she was named a Champion of the Arts by the Arts Council for Monterey. She is the founder of the nonprofit arts education organization The Big Sur Arts Initiative, creating award-winning programming serving the Big Sur Coast for over a decade and garnering recognition from the Turner Foundation, the Packard Foundation, First Night Monterey, and the Arts Council for Monterey County. She is a founding signature member of the Monterey Bay Plein Air Painters Association (MBPAPA), and an artist member of the Carmel Art Association. Erin is the author of two books, Drinking from a Cold Spring, A Little Book of Hope and Color Duets.